'Admiral met the fence perfectly. He rose to it as if flight were not only for birds. And he fell.'

Alan York's friend, jockey Bill Davidson, was killed in Admiral's fall. After the race, York visits the fence and discovers a coil of wire lying beside the fence post and signs of where the wire had been attached.

The fall was no accident - but murder.

Unable to convince the police of this, York is forced to turn amateur sleuth and is soon on the trail of a ruthless gang of race-fixers operating out of Brighton.

Now Alan's caught in a new race: find the gang's leaders before the gang catches up with him . . . 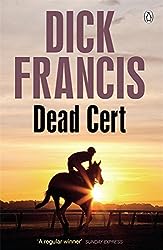 As a surprise, two horse owners decide to ride their animals themselves in a steeplechase. But Bill Davidson's horse "Admiral" behaves weirdly, and falls hard after an obstacle. Bill dies from his injuries. His friend Alan York suspects the animal was doped by unscrupulous bookies and starts to investigate. He doesn't know how serious his opponents are, and that he's in danger to suffer the exact same fate as his friend!