Physics teacher (and crack shot) Jonathan Derry is given some tapes to look after by a friend. They're not your usual tapes: they hold a computer programme which functions as a bookie-breaking betting system.

When Jonathan's friend is then killed in a suspicious explosion and two thugs turn up at his house waving guns and demanding the tapes, Jonathan realises that he's been handed a whole lot more trouble.

Jonathan knows he won't be left alone unless he gives them what they want. However, he decides to play his own game. After all, he's a crack shot. He can look after himself - can't he? 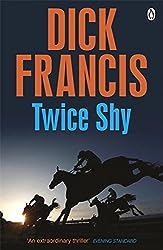 An Irish computer programmer who is also a skilled, amateur mountain climber is murdered when his safety line is cut. Because Cleveland's nephew has been taken in by the dead man and his wife, he is drawn into the case. The Maguffin he is seeking is a computer disc with a program that allows you to pick the winning horse 65% of time, but who has it? Among those whom Cleveland encounters in his search is the beautiful Cassie Donovan, one of the few female horse trainers in Ireland.