At midnight Neil Griffon's home is broken into and he is abducted by masked men. When he wakes up, hours later, Neil discovers that 'unless he cooperates' his kidnappers will destroy his father's racing stable, his precious horses and even Neil himself.

Returning to the stables, Neil can tell no one about his ordeal, or his kidnappers' threats of violence if he does not comply with their demands.

Trapped, Neil refuses to surrender - and devises an ingenious scheme to beat his kidnappers at their own game.

Packed with intrigue and hair-raising suspense, Bonecrack is just one of the many blockbuster thrillers from legendary crime writer Dick Francis. 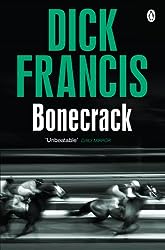