When inventor Stephen Scott abruptly fires his winning trainer Jody Leeds, the racing world is shocked and disgusted - though not quite as angry as Leeds, who swears revenge on his former friend.

But Steven is convinced that Leeds has been stealing from him - and worse - and felt he had no choice. And when Leeds decides to enact his vengance, Steven finds out just what a nasty piece of work he really is.

Because now Steven is not only in fear of losing everything - but also his life. Somehow, he must prove to the world that Leeds is a vicious crook - or die trying . . . 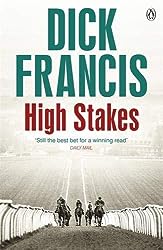