Charles Todd, a successful artist who paints horses, arrives at his cousin Donald's house and stumbles on a grisly scene: police cars everywhere, his cousin arrested for murder and Donald's wife brutally slain.

Believing - unlike the police - Donald's story of a burglary gone wrong, Charles follows clues which lead him from England to Australia and a diabolical scheme involving fraud and murder.

But soon Charles realises that someone is on his trail. Someone who wants to make sure that Charles won't live long enough to save Donald. 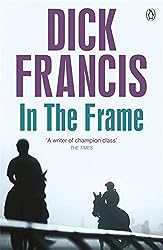 Films of In the Frame

Cleveland visits two Canadian friends, Don Stuart and Ray Sharp, and admires their collections of racetrack art and vintage wine. When Ray's wife Susan returns to her house, she finds the house bare with every stick of furniture stolen, including a priceless Munning painting. While she is on the phone to her husband , an explosion destroys the house and her. Ray,Don and his wife, and Cleveland rush to the smoldering ruins, and in the interim, thieves also rob the Stuart house, stripping it bear of everything including the contents of his $200,000 wine cellar. When Stuart is falsely accused of mob activity by a suspicious policeman investigating the two crimes, Cleveland journeys to Germany to renew his acquaintance with a German beauty and pick up the trail of the stolen paintings.