Ex-steeplechaser Randall Drew is reluctantly off to pre-Olympic games Moscow, as a favour to royalty. One of the blue bloods is destined to compete in the games and there are concerns - both of safety and of scandal - that only Drew, with his racing connections, can clear up.

On arriving - speaking no Russian and wishing he were back home - Drew is supposed to identify and contact one Alyosha to clear up the scandal. Instead, he finds himself tailed by the KGB and embroiled in foiling a terrorist plot - or die trying. 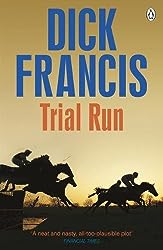